A large-scale digital work by renowned New Zealand artist Lisa Reihana is immersing viewers in a visual spectacle, telling the traditional Māori story of the origins of our world.

Commissioned by Regional Facilities Auckland (RFA), the permanent installation was officially unveiled by Prime Minister Jacinda Ardern last night in her capacity as Minister for Culture and Heritage.

Ihi fills two floor-to-ceiling spaces in the Aotea Centre foyer, enthralling viewers with the story of Ranginui and Papatūānuku playing out on 65 square metre digital screens. This makes it one of the largest and most significant works of contemporary Māori art in Aotearoa New Zealand.

Lisa’s previous work, which includes Digital Marae 2001 and the iconic in Pursuit of Venus [infected] received international renown and has had a significant impact on the reputation of Auckland and New Zealand. The new piece is set to become one of the country’s iconic works of art.

In his speech, Auckland Mayor Phil Goff said the work will be a significant drawcard to Auckland’s Aotea Arts Quarter.

“Like other world-class cities, such as Melbourne with its Federation Square, and London with the Southbank, Auckland needs public spaces that proudly showcase our identity and our stories.

“Ihi is not only a fitting centrepiece for our Aotea Arts Quarter, it is also an important addition to our rich Māori arts and cultural landscape.”

“Aotea Centre forms the heart of so many important arts and cultural activities in Auckland,” he said. “We now have a modern venue that is accessible for all, and this stunning artwork makes it even more inviting for our visitors.

“Most importantly, it celebrates Te Ao Māori. As kaitiaki for arts and culture, our role is to nurture and celebrate this heritage.

“We recently renamed Aotea Centre’s Kiri Te Kanawa Theatre to recognise a great ambassador for the arts and for New Zealand. Now we have Ihi, by one of our country’s most celebrated Māori artists.”

“I am especially delighted that a contemporary work of architectural scale is telling this timeless Māori story in one of Auckland most important public buildings,” she said.

“It is incredibly exciting to see a spiritually rich and poignant relationship between mother and son told in an active public space. Ihi, is a slowly revolving, cosmic journey which collapses the creation of the universe, as an ancient narrative that is at once alive and ever more present within us for Lisa’s telling of it. This commission is ambitious, brave and entirely transforms the Aotea Centre. Ihi will have a profound impact on our public art environment and future ambitions. A new benchmark has been set.” 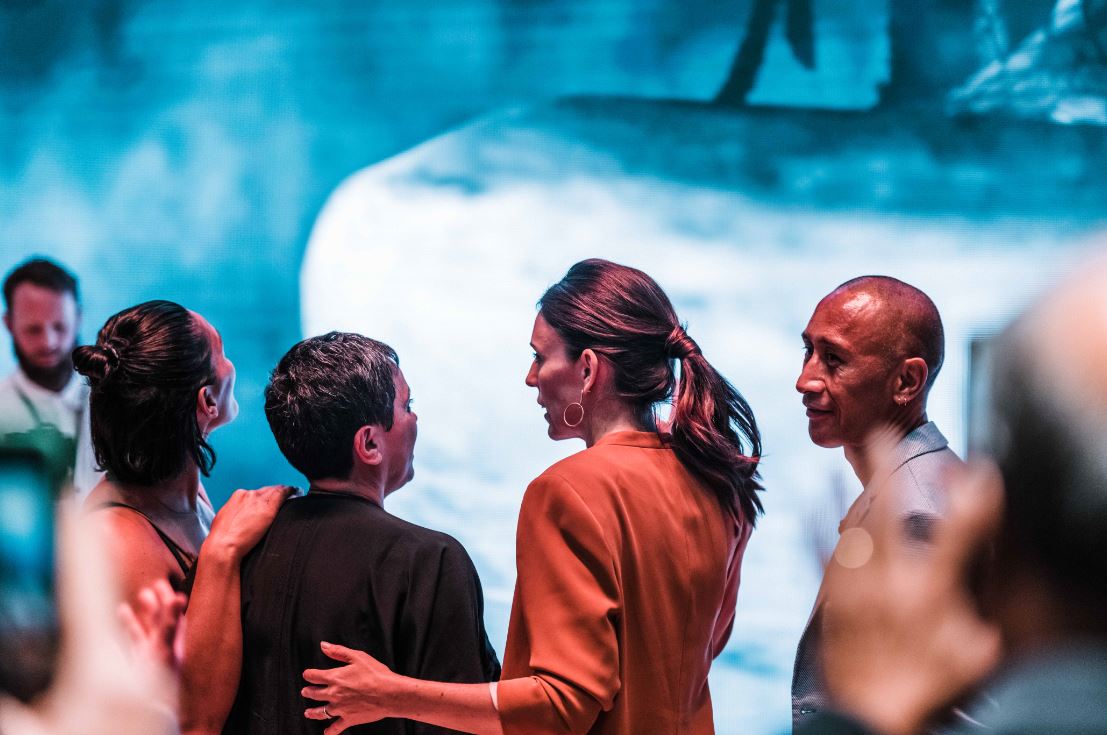 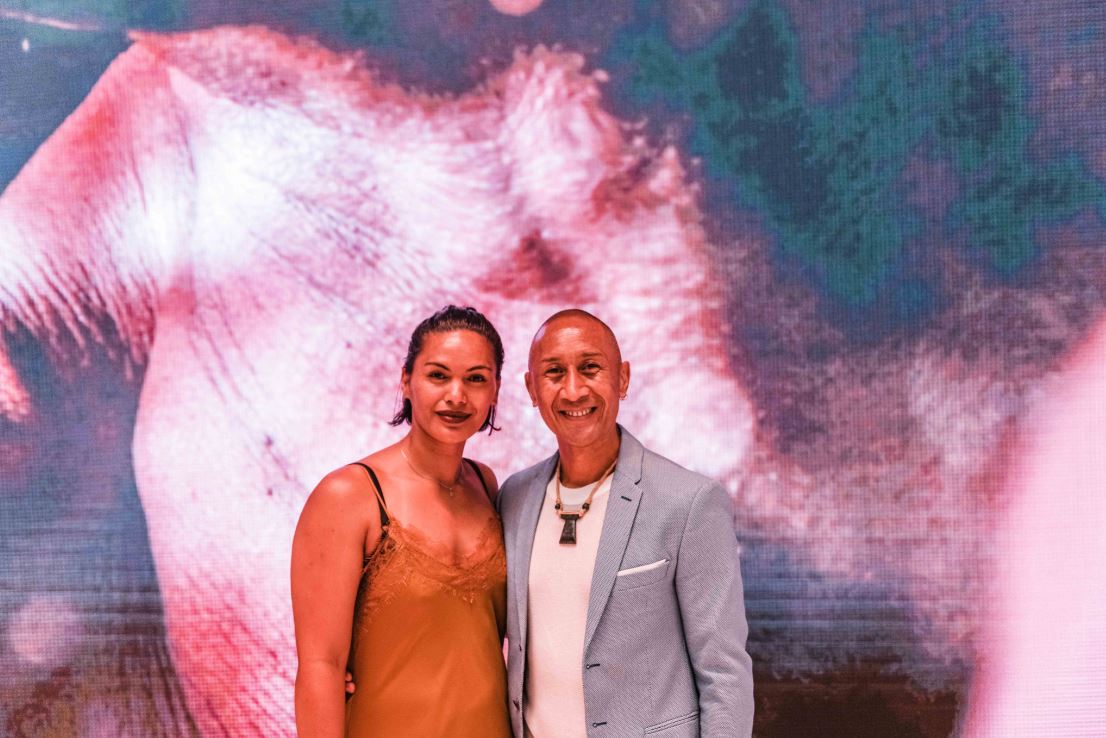 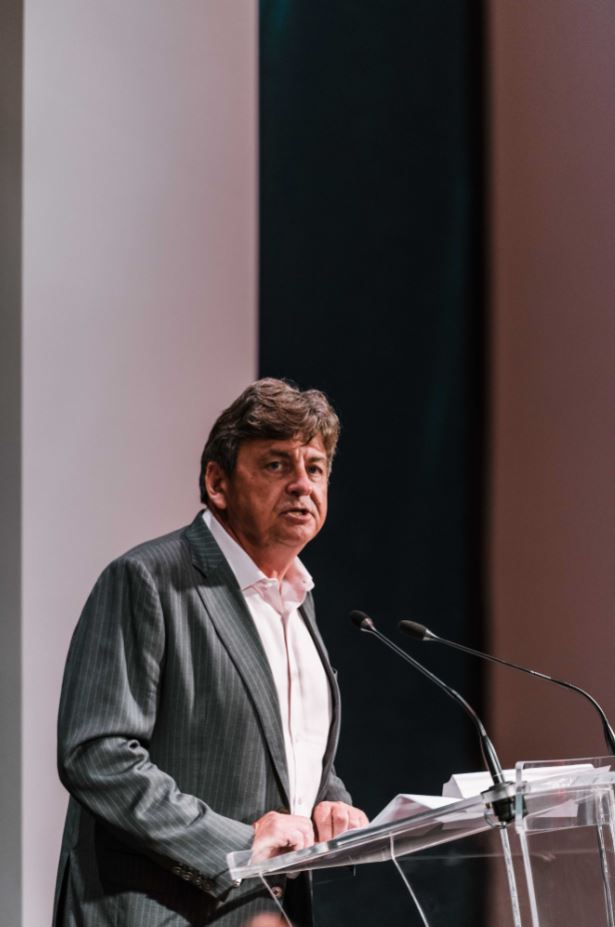 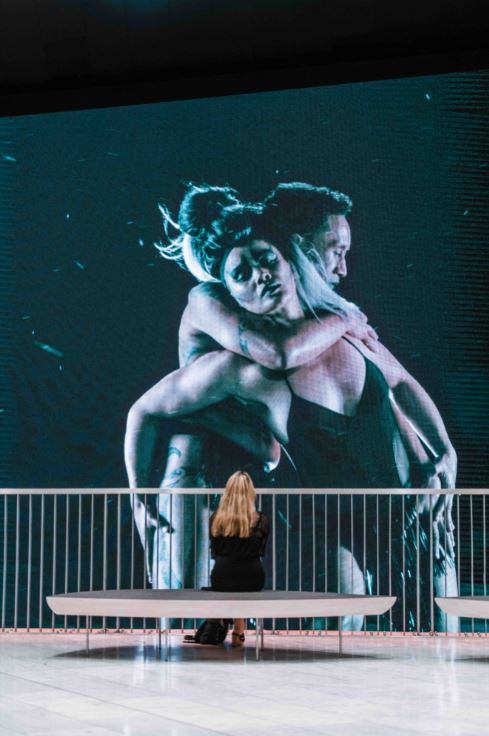 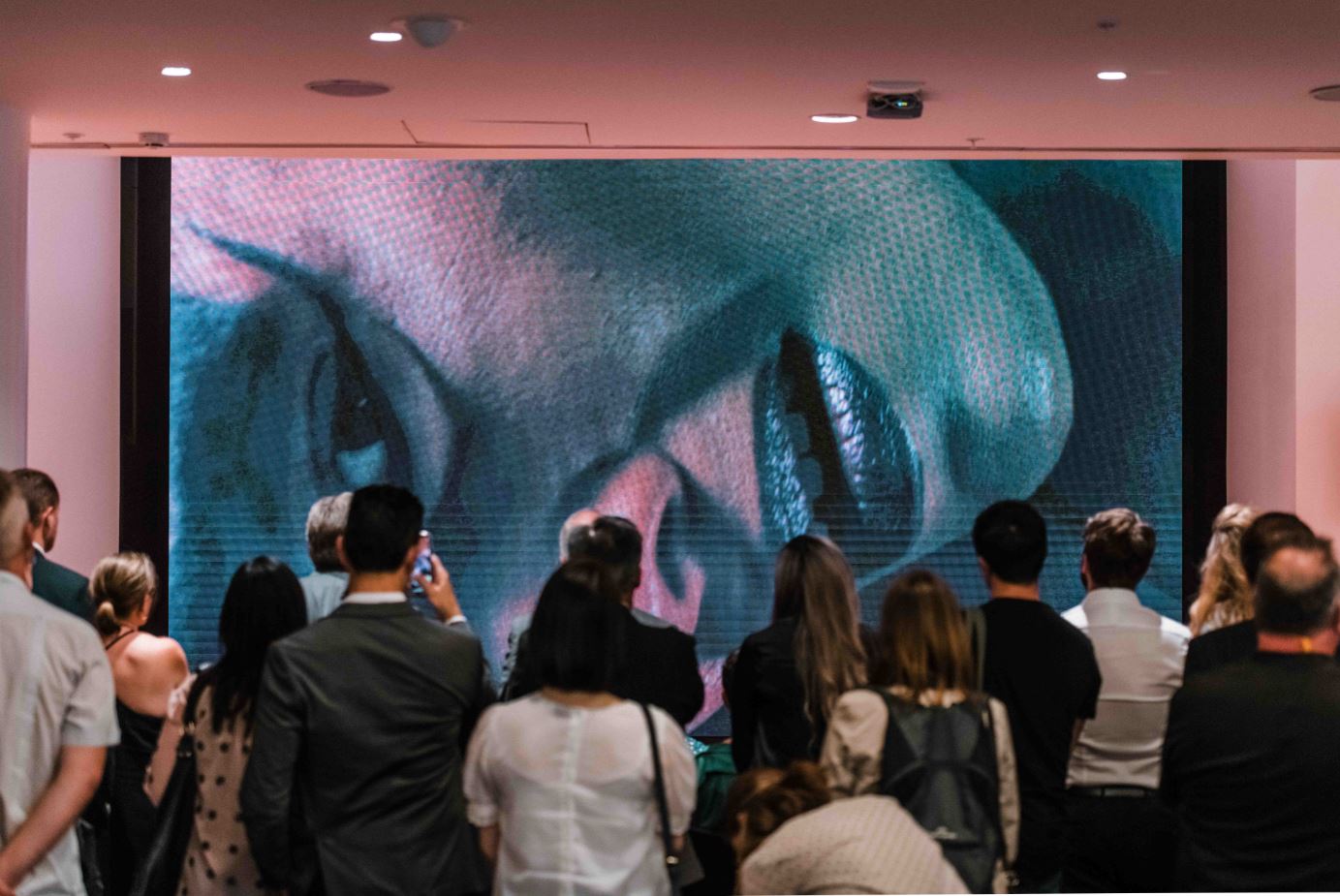 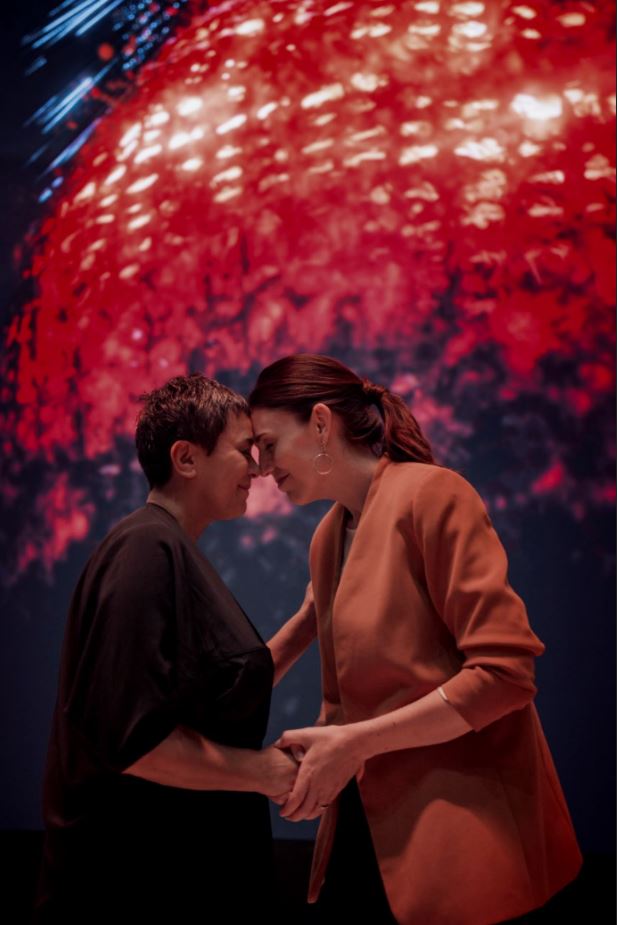 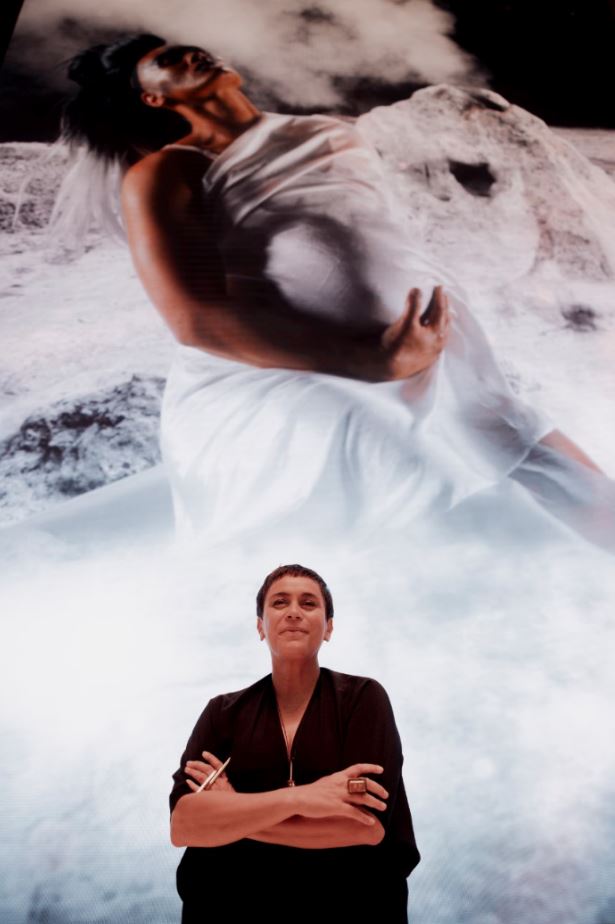 Lisa Reihana is a multi-disciplinary artist whose practice examines representation of history.

Lisa represented New Zealand at the Venice Biennale in 2017 with the large-scale video installation in Pursuit of Venus [infected] (2015-17). Her filmed vignettes populate a neo-classical French wallpaper, Les Sauvages De La Mer Pacifique. Amongst the images of the South Seas idyll portrayed in the original, the imperial gaze is turned back on itself by including cultural practices and first contact narratives to reveal sexual exploitation and gender fluidity. in Pursuit of Venus [infected] premiered at Auckland Art Gallery in May 2015 and has garnered widespread critical acclaim.

Born in 1964, Lisa is of Māori artist of Ngāpuhi, Ngāti Hine and Ngai Tu descent. She graduated from Elam School of Fine Arts, Auckland University with a Bachelor of Fine Arts in 1987 and completed a Master of Design at Unitec Institute of Technology. Lisa has an extensive exhibition history in New Zealand and abroad. In 2018 she was made a Member of the New Zealand Order of Merit; in 2014 she was awarded an Arts Laureate Award by the Arts Foundation of New Zealand.

Ihi explores the relationship between Tāne and Papatūānuku, and the separation that brought the world of Te Ao Mārama to existence.

In the beginning, Ranginui (sky father) and Papatūānuku (earth mother) were locked in a tight embrace. Their sons and daughters dwelt in the darkness between them. Frustrated by the claustrophobic space in which he was confined, Tāne decides to use his powerful legs to prise Ranginui from Papatūānuku, letting light between his parents and life to flourish. After wrenching his parents apart, Tāne surveys the view he has created - a cosmos of stars and moody brooding skies.

Tane continues his quest and climbs to retrieve the baskets of knowledge. Below is Papatūānuku, resplendent in her role as Earth Mother.

Ihi is the division, the separation, the power.  Here, light and energy converge under tension and we can feel the push and pull of life’s force.

Taane is one of New Zealand’s most revered dancers and choreographers. First introduced to dance as a child through Kapa Haka, he has been dancing and performing for 37 years. At the age of 15, Dupree Jazz initiated his pathway to formal training at The New Zealand School of Dance, where he graduated with Honor’s majoring in Contemporary Dance.

Formerly a founding member of Okareka Dance Company, Taane continues his journey as a solo artist through his new company: TAANE METE.  His artistic palette is influenced by Māori culture and the rich tapestry of Aotearoa, allowing Taane to weave together profound work steeped in indigenous tradition (see www.taanemete.com).

Nancy’s contemporary dance career spans 15 years as a performance/movement artist, choreographer, teacher and physical therapist. Nancy has worked with some of NZ most prolific companies and artists.  She was a core member of the Atamira Dance Company from 2008 – 2017, dancing in shows around the world and choreographing three works for the company.  For the Okareka dance company, Nancy performed in the company’s most successful show, Mana Wahine.

Nancy worked with the late Douglas Wright in his 2011 debut of ‘Rapt’ at the Auckland Festival, which also toured Holland.  She has collaborated with many artists in Aotearoa and around the world. As an independent artist, Nancy collaborates and co-directs with fellow dance colleague and partner Kelly Nash.  Their physical therapy company, Nancy + Kelly Contact Care LTD, allows them to share their passion for helping people resolve physical injuries and regain their health