The Auckland Live Digital Stage ushers in spring with a fresh new line-up of stories, ideas and inspiration from the worlds of arts and entertainment.

You can tickle your taste buds with a smorgasbord of lunchtime offerings every weekday from 12 – 12.30 pm including documentaries, inspiring stories, and ideas from around the world.

Or why not widen your horizons from dusk to dark every Wednesday through Sunday when the Digital Stage is transformed into a gallery showcasing creative video works from established New Zealand and international dancers, digital artists and more.

Scroll down for the full Digital Stage Spring Programme details.

WHAT'S ON THIS WEEK?

I Extend My Arms

OTHER DIGITAL ART AT AUCKLAND LIVE 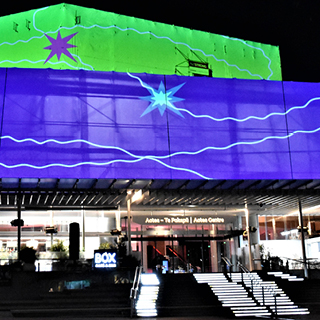 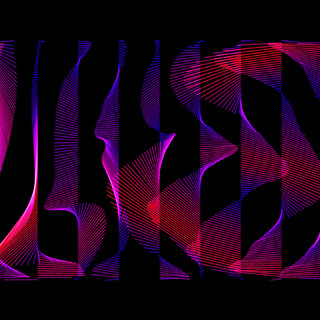 Auckland is a fast-changing city. Nga Taonga Sound and Vision is sharing some archive footage of the historical Auckland.

The Town Hall is one of the most iconic venues in Auckland and performers always have a special experience performing on its stages. Discover some of the artists who have stories to share of their times performing in this Auckland Live venue.

Soak up the colour, creativity and unstoppable style of two of Auckland’s most popular events: the annual Diwali Festival, and NZ Fashion Week.

Discover the stories behind the names of some of Auckland’s suburbs in the TIki Towns series.

Follow the journey of a group of young Kiwi kids on their way to school, and (re)discover what it’s like to grow up in unique NZ.

Navigate a selection of family-friendly content to relax the oldest and inspire the youngest.

Navigate a selection of family-friendly content to relax the oldest and inspire the youngest.

Seven-year-old Chinese-Kiwi twins, Maggie and Michael, hang off their grandmother's every word as she tells stories about tornadoes, dragons and monkeys, teaching valuable life lessons and encouraging them embrace their heritage.

Auckland Live's programme of family shows often takes inspiration from some of the best-loved childrens’ books around.

In 2019, we premiered Tu Meke Tūī!, based on the gorgeous picture book by Malcom Clarke and artist Flox.

And we wrapped the year with Roald Dahl’s Revolting Rhymes & Dirty Beasts, adapted for the stage by shake & stir theatre co. Check out more of the stories!

Join New Zealand-made prehistoric creatures Kiri and Lou through their adventures in the forest a long, long time ago. These stories centred around  friendship will encourage and entertain littlies,  while grown-ups will enjoy the  voices of Jemaine Clement and Olivia Tennet.

Ready to sing and dance? Join the Kia Mau! team as they perform beautiful waiata and powerful haka.

Listen to some of the best New Zealand musicians as they perform in live sessions recorded at Radio New Zealand.

Deepen your understanding of Vivaldi's Four Seasons 'Summer' movement through music and talk with the Auckland Philharmonia Orchestra.

Deepen your understanding of Vivaldi's Four Seasons 'Winter' movement through music and talk with the Auckland Philharmonia Orchestra.

Enjoy a taster of what's happening at the raw edge of indie pop and rock from around NZ.

Roots and groove are the mainstays of these much-loved and up-and-coming musical artists. Check them out!

The Auckland Philharmonia Orchestra performs the last symphony composed by Robert Schumann – ‘Symphony No.3’ - also known as the Rhenish.

The Auckland Philharmonia Orchestra performs Metamorphosen, a study for 23 solo strings composed by Richard Strauss during the closing months of the Second World War.

The Auckland Philharmonia Orchestra performs Beethoven’s Symphony No. 6, also known as the Pastoral Symphony, made famous in the 1940 Disney animated film Fantasia.

The Auckland Philharmonia Orchestra performs Violin Concerto No. 3 by Saint-Saëns, composed in 1880.

Relive some of the best moments of 2019’s Gala Concert celebrating the remarkable career of soprano Dame Kiri Te Kanawa, and the renaming of the Aotea Centre’s ASB Theatre to the Kiri Te Kanawa Theatre, in her honour.

Students of Auckland’s Media Design School show the way forward with fascinating takes on the real and digital worlds we inhabit.

The vast overland route from Auckland to the deep south is a part of New Zealand national identity, an iconic piece of Kiwiana. A journey where city and sprawl gently yields to rolling pastures, volcanic extremes, tranquil waterways, the rough Otago high country and the grandeur of the Southern Alps and Milford Sound.

Around each bend, hidden stories and amazing views are revealed. It’s hypnotic, addictive and meditative. You can experience this country in a way you might never consider in your real life.

With no score, no narration, an intentionally immersive soundscape, and beauty shots held far longer than expected, enjoy a selection of this unique screen experience.

Dive into the past to discover how New Zealanders enjoyed their holidays in years gone by. All archive footage provided by Ngā Taonga Sound & Vision.

Incorporating the visual beauty and symbolism of poi, a traditional Māori performance, discover the stories of inspiring wahine (women) who share hopes and dreams for their daughters.

Incorporating the visual beauty and symbolism of poi, a traditional Māori performance, discover the stories of inspiring wahine (women) who share hopes and dreams for their daughters.

Discover (or rediscover) key epsiodes of The Spinoff's ‘Kaupapa on the Couch’ series, which looks at issues within te ao Māori that aren’t as well known or understood as they could be.

Kaupapa on the Couch

Get to know the 2019 Arts Foundation’s Arts Laureates, artists with outstanding potential for future growth and whose practices have a significant impact on Aotearoa.

A Kiwi Christmas is special in so many ways. Archive footage provided by Ngā Taonga Sound & Vision highlight some of our unique and long-standing traditions.

Language and traditions are elements that define who we are. Follow the stories of a group of New Zealanders and Cook Islanders embracing cultural heritages to help them flourish.

The environment of Aotearoa is unique to this country. Discover stories of New Zealanders caring for our precious natural elements and indigenous taonga.

Meet young Kiwis as they discuss the impacts of colonisation on Aotearoa and modern race relations, and how they are decolonising themselves.

Discover the stories behind the names of some of Aotearoa New Zealand’s places in the Tiki Towns series.

Pixels, glitches, colours and sound are choregraphed together to reveal different views of our world. Dive into an international selection of video art from French-based festival, Videoformes.

Pixels, glitches, colours and sound are choregraphed together to reveal different views of our world. Dive into an international selection of video art from French-based festival, Videoformes.

This portrait of a landscape shot over the month of September is of Auckland’s inner-city urban farm OMG - Organic Market Garden located at 257 Symonds Street.

In the first 6 months of 2019 the For the Love of Bees community sequestered over 10 tonnes of carbon via photosynthesis and composting on this 700 square meter site. In less than a year this site is producing enough nutrient dense food to sell to its local community to support the living wage of their farmer.

This is Smuts-Kennedy’s second portrait of a garden, the first being “Beautiful Geometries” shot while artist in residence at McCahon House, Titirangi  2017.

These two films explore the limitations of the camera lens to journey into space between the fragile planes of representation and abstraction and the complicated and mysterious boundary where light shifts from the metaphysical to inhabit the material world we experience as real.

Slowly moving in and out of focus over an hour Sometimes just touching the earth is enough invites the viewer to pause, slow down and allow the colour-fields of light to wash over them. It is Smuts-Kennedy’s hope that watching this film might leave the viewer feeling restored in a way that being close to nature can.

Screened in various locations across the city during Artweek this film begins to bring nature back into the heart of the CBD, our place which we will rewild together in the coming years as we begin our journey towards mitigating climate change and creating biodiversity well being.

Principle of Hope | A 25 minute animation by Sarah Smuts-Kennedy

Time is simultaneously slowed down and speed up in Principle of Hope, an animated film about the miracle of life, the power of water, and the influence of light.

The creation story plays out in macro though the propagation of Chia seed, a rediscovered Aztec super food traded as currency and banned by the colonising Spanish, in a microclimate where the artist plays god.

Principle of Hope, follows the utopian impulse of picturing a better world using the aesthetic strategy of modelling possible ‘what if’ scenarios, in this case the cause and effect implications current global economic policy of growth has on resource use and demand.

Invisible forces, made visible play out on the vulnerable that against all odds attempt to survive unpredictable circumstances through the ecosystems greatest energy generator, photosynthesis.

In 1976 American Abstract Painter Agnes Martin made a one off 70 minute hand held 16mm film called Gabriel centered around a ten ¬year¬ old boy as he wonders through the mesa near where Martin lived to the sound track of Bach’s Goldberg aria.

Gabriel Martin claimed was “about happiness and innocence” and investigated the same themes as her body of work, which was singularly obsessed with line on the canvas.

Having never been lucky enough to see the film Smuts-Kennedy has been left to imagine it from the few still images she has been able to find. Between the compositions of colour, rhythm, repetition, in her paintings and these few photographic observations of nature she is left to find her own insights into the connections between the language of geometric abstraction, the inspirations Martin so readily talked about and the world as we mostly readily encounter it.

Beautiful Geometries - is a hand held digital film shot in Colin McCahon’s Garden where Smuts-Kennedy spent 3 months in Residence in 2016 performing a healing for the Kauri trees using the November Light Colin McCahon referred to as a Miracle in the first year he lived there.

It re-imagines Gabriel as a means to explore and learn more about what Martin the abstract painter meant when she said she worked “with her back to the world”.

Beautiful Geometries - uses the limitations of the camera lens to journey into space between the fragile planes of representation and abstraction and the complicated and mysterious boundary where light shifts from the metaphysical to inhabit the material world we experience as REAL.

Dive into the pattern world of New Zealand VJs

Discover an unusual clock, home to a character trying to control it. Reading the time becomes impossible, mirroring real life and our constant race against time.

‘…this work raises questions of narration and translation by recounting two interconnected stories in a voiceover performed by the artist with quiet intensity. The first is in te reo Māori, subtitled in English, while the second is in English, subtitled in te reo Māori. Both tell of trajectories of migration and settlement that pre-date the arrival of Europeans in Aotearoa (New Zealand), of crossing sea and land in search of a different future, carrying the accumulated practices of the past to new horizons’   - Truth or Consequences, Erika Balsom.

This is a free, non-ticketed event.

The Digital Stage is open every day.  Please check What's On Today for programme details and hours of operation*

* Hours of operation vary according to weather conditions and other relevant factors.